Camino de Santiago routes are becoming a very popular experience, let’s discover what makes them so successful among travellers and pilgrims!

Camino de Santiago routes are hot. The number of pilgrims who set out every year continues to increase. But why do people choose to follow ancient pilgrimage routes? WAW Travel can identify some elements that contribute to the success of this life-changing experience.

The Cathedral of Santiago de Compostela

All Camino de Santiago routes lead to the Cathedral of Santiago de Compostela. When I got there the first time, I felt a surge of emotions and, unexpectedly, I cried. For a few minutes, the pain in my feet and muscles seemed to disappear and the backpack on my back felt lighter. After 3 months and about 900 kilometers, I had just seen the cathedral of Santiago de Compostela for the first time. I had reached my destination and walked the last kilometers of my Camino de Santiago routes, following the camino Frances of St. Jean Pied de Port.

It turns out there is a term for my experience: “mount joy”. According to Dr. Guy Hayward, director of the British Pilgrimage Trust, the concept has already been described in medieval reports.”The first time pilgrims would see their final destination during their Camino de Santiago routes, they would normally be somewhere higher up, such as a hill overlooking the city,” he said, explaining that pilgrims, after weeks or even months, would “weep for joy” from the excitement of finally reaching their goal – hence the term.

Pilgrims all over the world

Camino de Santiago routes and pilgrimage are hot. The most famous pilgrimage in Europe is the Camino to Santiago de Compostela in Spain. In 1972 only 67 pilgrims were registered to make the Camino de Santiago routes to Santiago de Compostela and completing the pilgrimage route. In 2019 there were 348,000. Other lesser-known pilgrimages, such as the Via Francigena from Canterbury to Rome, are attracting more visitors while the Japanese Buddhist Shikoku pilgrimage has also seen a similar growth. Millions of Muslims go on Hajj, the pilgrimage to Mecca in Saudi Arabia which is one of the five pillars of Islam and something all Muslims who are physically and financially able are obliged to do (rising trend can also be seen there). Meanwhile, the Hindu Kumbh Mela in Northern India is described as the world’s largest human gathering, attracting some 220 million pilgrims over 50 days in 2019.

The Covid-19 outbreak severely curtailed pilgrimages in 2020 and 2021 but still, the numbers are growing every year. It is a safe form of travelling, that assures social distancing and open air activities. What is it that Camino de Santiago routes and this form of travel that attracts so many?

Camino de Santiago routes to Santiago de Compostela today could be seen as a specifically religious form of travel. But even in the past, being on the road was just as important as spirituality. In many ways, Camino de Santiago routes  were the forerunner of modern tourism. In the old days, if you wanted to see the world, visiting a sacred site was one of the few reasons you got to travel. As pilgrimage places became popular, a whole host of infrastructure would grow around them – from souvenir shops to guidebooks.

As a form of travel, walking Camino de Santiago routes was unlike anything I had done before. Walking for three months. Every day. And yes, sometimes I thought, “What have I started?”, but I gained a lot from the experience. It suddenly made the world more human in a way that an airplain, train or car travel never can. I saw landscapes around me gradually change – something you can’t see from a train window or even on a bike. 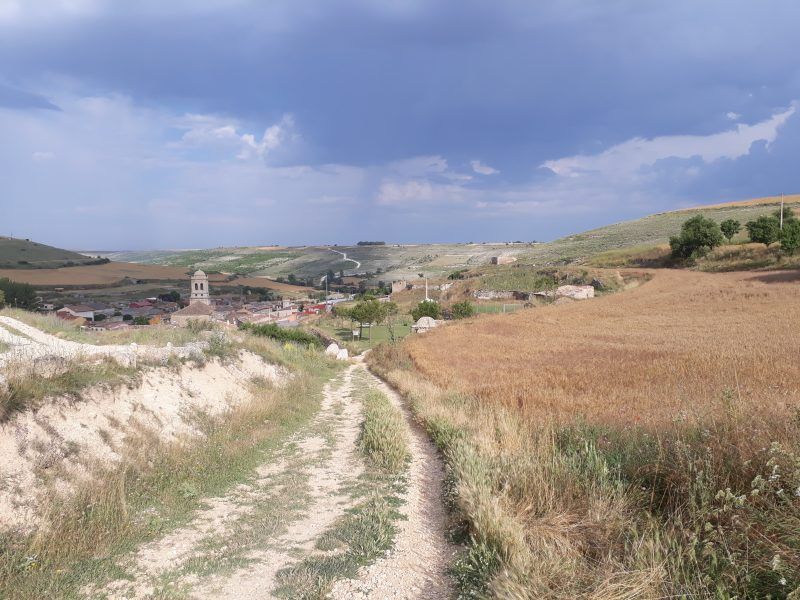 Walking the Camino de Santiago routes also made everything easier. I really had nothing to think about, unless put one foot in front of the other and decide what to eat for lunch. Moreover, I had never enjoyed nature so much. When you spend several days in a row in nature, you start to feel different. But why a pilgrimage?  After all, you can feel connected to nature everywhere. In my view, “normal” walking holidays are about looking for some of the same things, but pilgrims who walk or bike Camino de Santiago routes may be more consciously looking for something deeper. Professor Reader, who has studied pilgrimages around the world, says that in many cultures, people feel they need a “good” reason to travel. They want to feel that they are not just going somewhere for fun, but that there is some deeper or legitimate reason to go on vacation; for many people, becoming a pilgrim is such a reason.

About the Camino de Santiago routes to Santiago de Compostela

The pilgrimage to Santiago de Compostela got a kickstart under Franco, the dictator of Spain until 1975, who started promoting the Camino by linking it to his ideology of “muscular Spanish Catholic nationalism”. After the death of Franco and the integration of Spain into the European community, the pilgrimage was gradually seen as an expression of a shared European identity. For some, embracing the statue of the apostle Saint James in Santiago de Compostela is a form of liberation and the beginning of a new life. For others, the pilgrimage is a sporting challenge. Regardless of the motivation, the pilgrimage route has a lot of meaning for everyone, that only those who have taken up this challenge can have a say in it.

Don’t hesitate to contact us for any curiosity, we will be happy to help you join this amazing adventure! Write an email to hey@waw.travel or follow us on our social profiles for constant news and updates: Instagram – Facebook.