Picos de Europa is the second most visited National Park in Spain and one of the most breathtaking because of its  enormous white limestone mountains and the beautiful landscape around it. It is located on the border between Asturias and León, two spanish provinces, and Picos is less than 30 km away from the sea so sailors can see the highest peaks while approaching to the coast.

Its white limestone rock has made Celtics, Romans, neanderthals and of course people nowadays fall in love with it. There are two main tourist attractions, Torre Cerredo and Picu Uriellu. The first one is the highest moutain (2.650 metres above the sea) and Picu Uriellu (2.519 metres high), also known as Naranjo de Bulnes, has a unique and iconic shape that has to be seen.

Even though their name, Picos de Europa are not the highest mountains in Europe, not even in Spain. If you really want a quite place, away from urban areas and without many people Picos de Europa is your winning horse because they are overlooked by those who don’t explicity look out for walking holidays. You will meet some locals there but you will breathe peace in Picos de Europa. You can choose the challenge you want to face, from a leisurely walk to admire the landscape of the north of Spain to rock climbing the highest mountains to get the best views.

The most famous mountain in all Picos de Europa is the Naranjo de Bulnes. It is located on the north side of the central massif and its unique shape, like a giantic monolith, has made the also known as Picu Uriellu the highlight in the area. When you see it you can understand why Celtic people made it their god centuries ago. You can see it sticking out from the surroundings and there is a famous and isolated village near it, Bulnes, which can be reach by walking or with a funicular which takes you to the village in seven minutes. There is no road to reach Bulnes so driving is not an option.

The landscape of Picos de Europa

Picos de Europa is composed by three massifs: Cornión at west, Andara at east and Urrieles, the central one. There is also a deep gorgof the river Cares that separates massifs Urrieles and Cornión, known as La Garganta Divina. There are some beautiful lakes in Picos de Europa, the Lagos de Covadonga, linked to glacial processes which became smaller over the years by mining operations in the area. There are nothing more than limestone rocks from 1500 metres and beyond but, at lower height, we can find birch, chesnut, oak, elm and even pastures.

You have to be careful with weather here because we are in the mountains so it can change extremly quickly but, fortunately,  nowadays we can check the weather forecast at anytime, anywhere.

As a Biosphere Reserve, there is a large diverse and protected fauna. Picos de Europa has species at all levels of the food chain, from invertebrates to nearly extinct large predators (you can be chill, there are only a few located in remote areas). There are wolves, bears, eagles, falcons, hawks, wildcats… But we have to stand out two of them, the urogallo and the pyrenean chamois, called rebeco in Spain. They are unique and peaceful animals which you can see in Picos de Europa.

If you are interested in discovering Picos de Europa we have the best option for you but, if you want to see the whole north of Spain we have a special 15 days trip for you to explore every part of it. 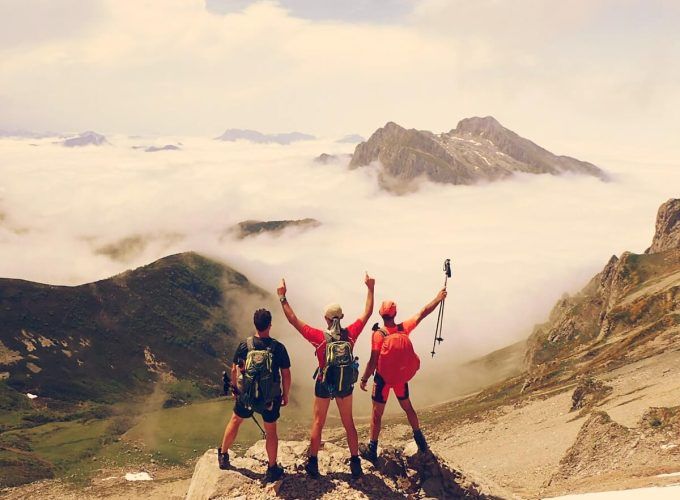